All Members of the Society: 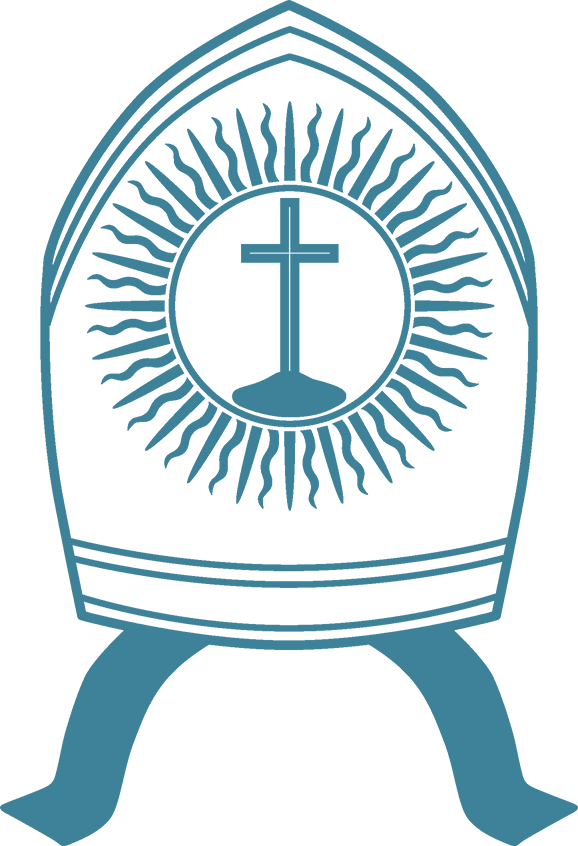 The Seabury Society is only one in a line of institutions that have borne the same name throughout the history of the American Church – and aims to prove itself a legitimate heir to each of them. The earliest can be traced back to 1844, to Trinity Parish in New Haven. This Bishop Seabury Society – named after our protoepiscopus, The Rt. Rev. Samuel Seabury – began as a small group of devout women within Trinity Parish –though quickly expanded to include other women in other parishes – who paid a yearly tax to be donated to the church for general parochial needs. This changed in 1845 when it was decided that the donations should be put to some Missionary Cause. Around this time, the work of the newly instituted Nashotah House was brought to the attention of the Society. “The primitive, apostolic principles on which it was conducted, the work designed to be accomplished by it, and the hard, self-denying life of those who were engaged in it, at once awakened their interest, and commended it to their approval, and Nashotah was unanimously adopted as the Seaburys’ Mission.” (Sarah M. Edwards, 1883) The Society faithfully provided monetary support to the House, as well as Surplices for her Seminarians (a work which the Seabury Society continues today). These initial contributions to the work of Nashotah House extended well into the other missionary adventures of the Bl. James Lloyd Breck, even to his final days in California. As the members of the Society grew older, they established the Junior Seabury Society for young folk who wished to continue the Society’s cause – though was unfortunately not as long-lasting.

Twenty years or so after this initial founding, on Ascension Eve, 1865, the Bishop Seabury Society for Episcopal students of Brown University was founded. This younger Society consisted of men preparing for Holy Orders. The members of this newly founded Bishop Seabury Association (as it is sometimes called) spent their time occupied in service to the Church by distributing religious literature and holding services (another work continued by today’s Seabury Society). “Many of the Bishop Seabury Society men assisted the Bishop of Rhode Island by taking services at small missions on the outskirts of Providence.” (Norman Joseph Catir, Jr.,1964) These men were formed by the mind of the Oxford Movement and regularly received instruction from none other than Rev. Morgan Dix. These pious students represented a commitment among the Churchmen of their day to remain firm and Keep the Faith once delivered to the Saints: “Our ministry is not a new thing –a self-originated line; it has come through Archepiscopal prelates from remote ages. Our Prayer-book was not composed by Bishop Seabury and Bishop White, nor by English Bishops in the 16th century; nor was it a mere collection of forms which struck the fancy of the compilers … Regard her as you will, our Church is no new institution. Her lineage is not brief, her ancestry is very ancient. She has a story, a chronology, traditions as old as those of any Church on earth, save those of Jerusalem and Antioch.” (Morgan Dix, 1868) Several generations of clergy were formed through this everyday asceticism of ordinary commitment to the Church.

Now in 2019, one-hundred and fifty-four years after the founding of this second Devotional Society, the name was taken up once more to provide both clerics and laity within the American Church the ability to continue in the same work of the Kingdom as those who came before us. Like the work of Trinity Parish and Brown university, the Seabury Society is committed to the cultivation of Christian Piety through classical Anglican Spirituality. At the center of this piety and practice is the particular work of prayer distinct to the Anglican Tradition. From this work of prayer, as outlined in the Book of Common Prayer, our life extends outward into our daily activities and labor. Because the locus of piety is found within the microcosm of the individual and the family – and because the essential nature of piety is deep-rooted faithfulness – we advocate for the preeminence of the ordinary, faithful, and consistent way of Christian living as it is taught in Holy Scripture and displayed in the lives of our Saints. This is the legacy that has been left to us – and it is available to all, regardless of vocation.

I comply with this request the more readily, from a wish to call the attention of the Church people generally, to the importance of establishing Bible and Common Prayer Book Societies, and of aiding these institutions by their contributions… Let me recommend the institution of new societies in districts where the number of Clergy and congregations in a vicinity render this practicable; and where this cannot be done, in individual parishes and congregations.

I believe, sir, that in the case of heresy or error of any kind creeping into the Church, these Institutions, once founded, will be the powerful barrier against their progress. I begin to feel this to be the working of our own system already: Cᴀᴛʜᴏʟɪᴄ Tʀᴜᴛʜ without party – Pʀᴀᴄᴛɪᴄᴇ, not theory or romance. 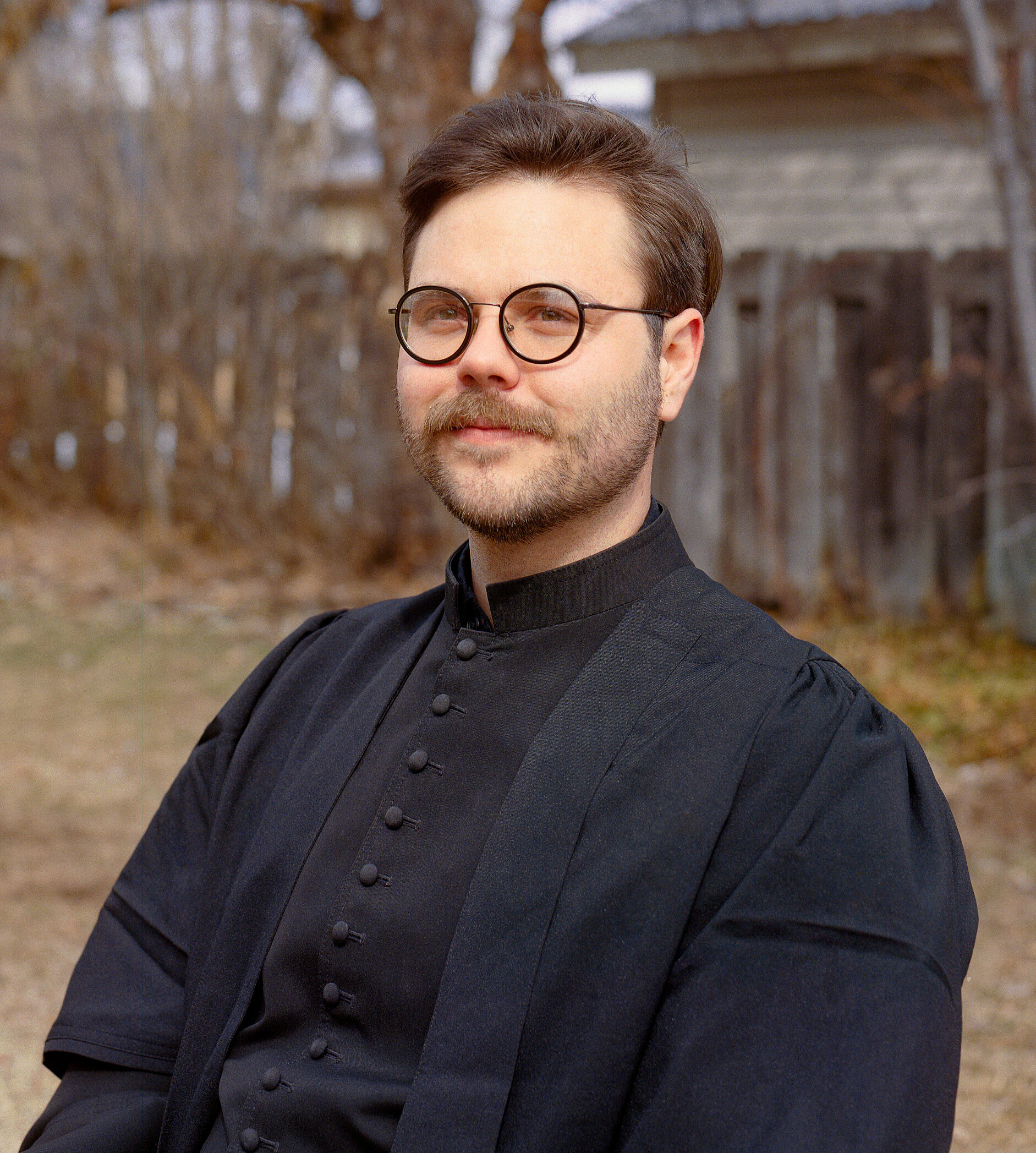 Brandon LeTourneau is a Seminarian in the Anglican Church in North America and a regular contributor to the North American Anglican. He is currently pursuing his MTh from the Antiochian House of Studies, concentrating in Oriental Orthodox Theology. He hopes to one day serve the ACNA in an Ecumenical Capacity.

Tyler Dumont is an entrepreneur and Anglican layperson in Sacramento, CA. Aside from a broad interest in theology, his main interests are Social Theory and Continental Philosophy, with a particular interest in the secularization and consumerization of the West. When he is not working or studying, he co-hosts a podcast with his best friend called Suffer Map. 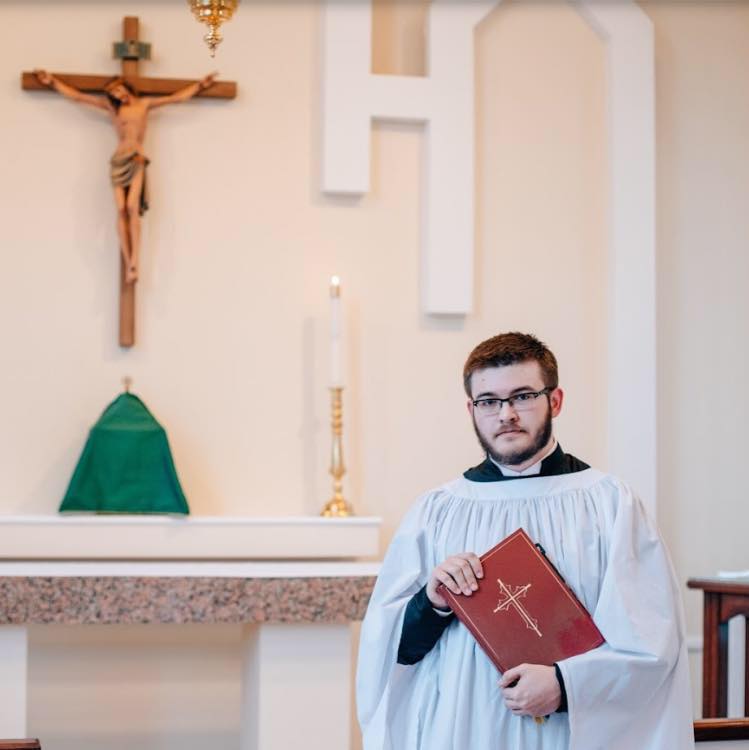 Jacob Hootman is a lay reader at Saint Laurence Church in Southlake, Texas, & a Postulant for Holy Orders in the Diocese of Fort Worth. He is currently a senior studying for a BA in History at the University of North Texas. He has written for the North American Anglican & has served on the Anglican Church in North America’s Liturgy and Common Worship Task Force since 2018, and as Secretary since 2020. 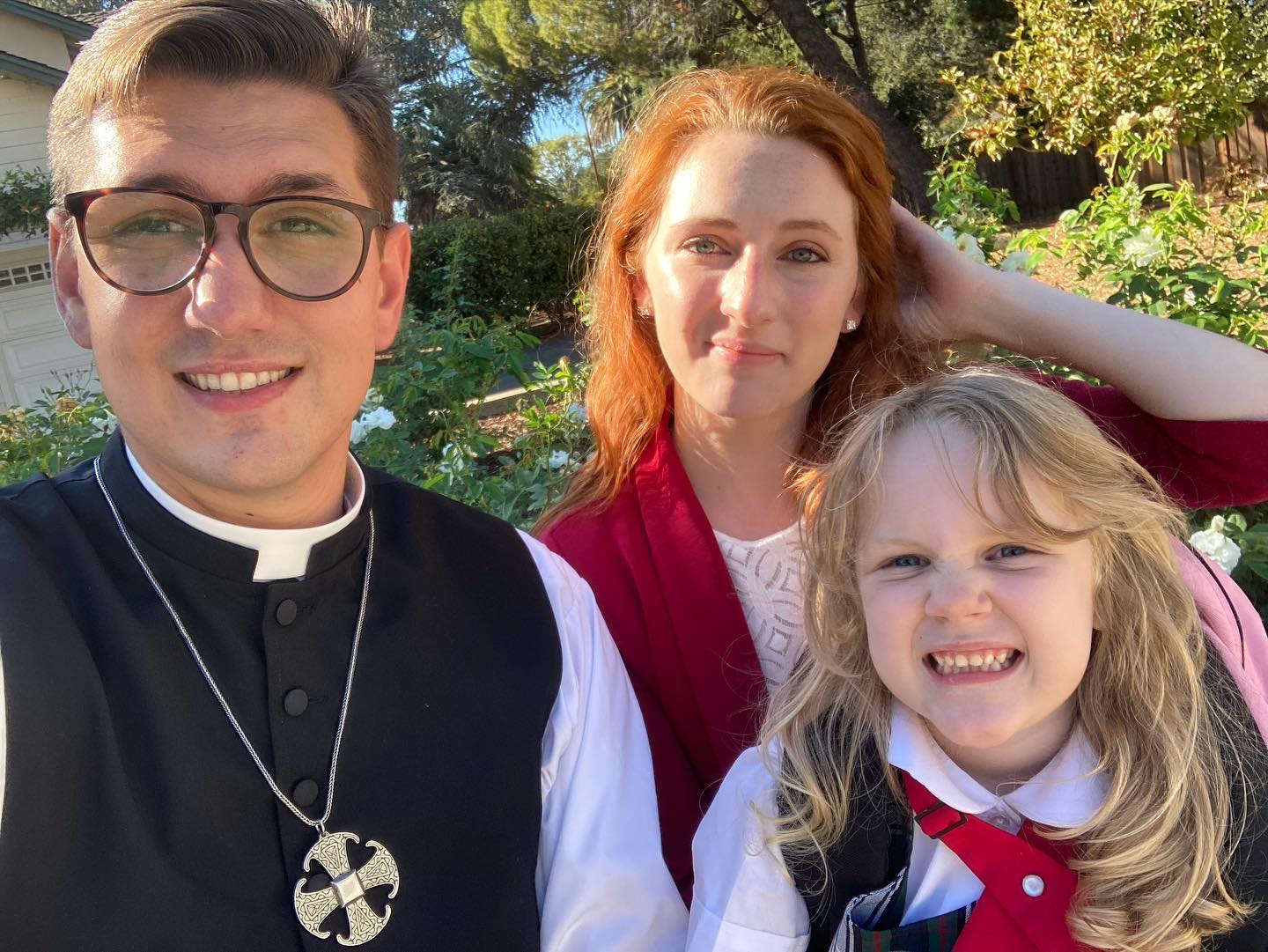 Fr. Macias is the rector of St. Paul’s Anglican Church in the Diocese of Mid-America (REC), and the headmaster of Canterbury Christian School. 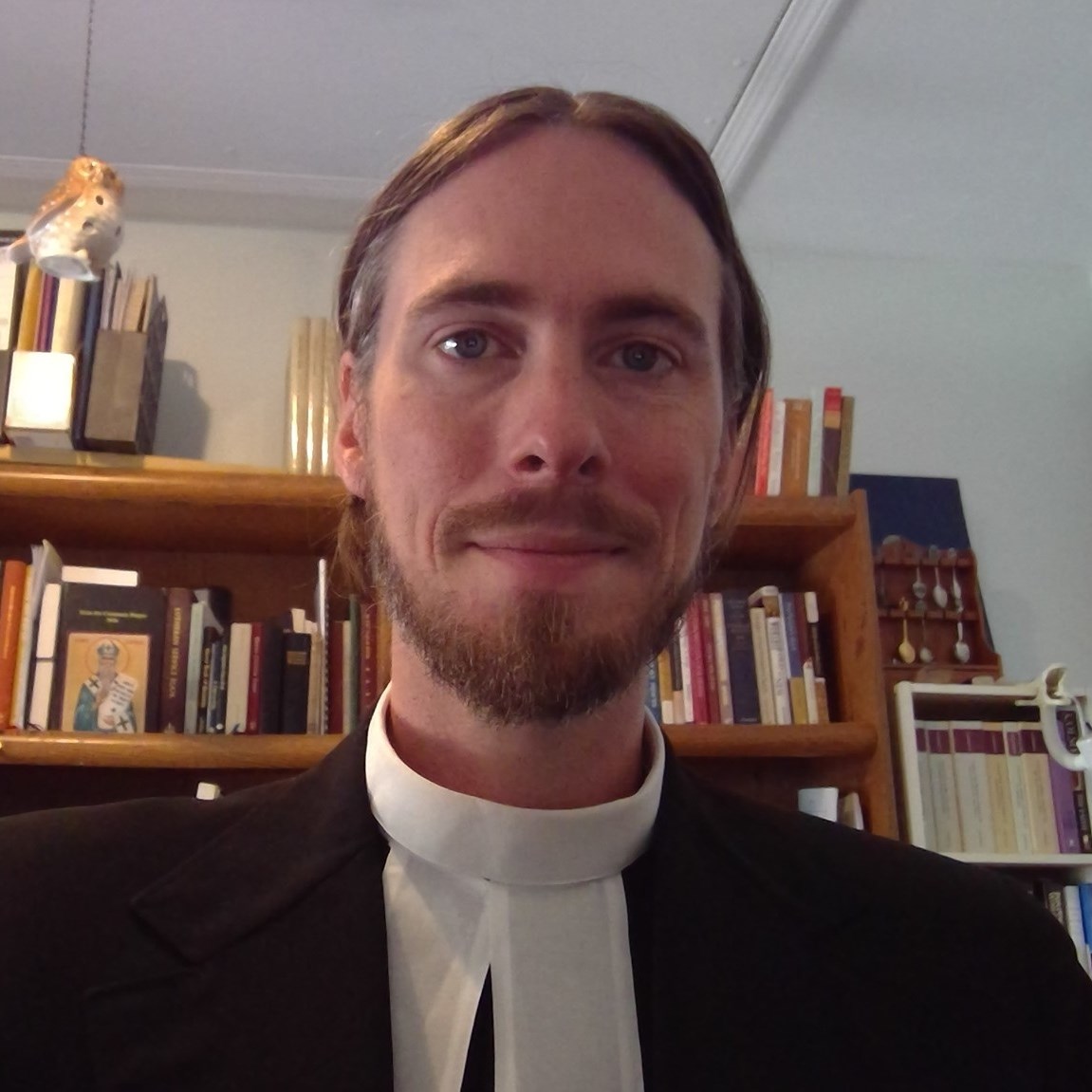 Fr. Brench is the Vicar of Grace Anglican Church, in the Anglican Diocese in New England, and the producer of the Saint Aelfric Customary. The Customary’s three-fold purpose is conformity to the Provincially Authorized Liturgical Texts, commitment to the fullest possible execution of the liturgy, and concern for the established traditions of the Anglican liturgy before our time.